First, a disclaimer. This post doesn’t contain actionable items or a list of best practices for video marketing. This post, however, is a theoretical discussion aimed at convincing you that attempting to tap into the power and magic of the movies could be very worthwhile to your business.

Most people, in one way or another, have their own personal love for movies. Whether it’s a specific love for film itself or the memories tied to movies that pull you back to the time and place where you first saw them, moving pictures have been a significant part of our culture for over 100 years. Even the phrase, “let’s go to the movies” is something that seems passed on from generation to generation, like a precious family heirloom meant to be treasured and held dear.

Do You Know These Quotes?

The following is a simple exercise that highlights the timeless nature of movies. Below are seven famous quotes from movies released over the last century. The films are all well known in their own right; however, the goal isn’t to determine what makes a movie famous or hold a contest to see who can recognize the quotes, but rather, to underscore that most of these quotes are so ingrained into the fabric of popular culture that they are almost instantly recognizable.

“I love the smell of napalm in the morning.”

“I'm going to make him an offer he can't refuse.”

“You don't understand! I coulda had class. I coulda been a contender.”

“I think this is the beginning of a beautiful friendship.”

Chances are, one of three things happened as you read each quote. The first, and probably most common reaction, is that you know the quote and movie it’s from, either because you’ve seen the film or heard an indirect reference. The second reaction is that you know the quote but don’t know the movie, and it’s possible you didn’t know the quote is from a movie (you’d just heard it used before). The third reaction is that you don’t recognize the quote and didn’t know it’s from a movie. However, if you fall into this third group, chances are you Googled a few of the quotes and probably found a ton of information on these sentences - discussions of meaning, YouTube clips, lists of famous quotes, etc. Also, if you’re observant, you probably noticed that your search query was auto-completed by Google before you were even done typing it.

The point is that these quotes (and their themes and messages) have become almost bigger than the films themselves, both because of the transcendent nature of movies and our unbridled affection for them.

Note: In the order they are listed, the quotes are from Casablanca, Apocalypse Now, The Godfather, On the Waterfront, Citizen Kane, Casablanca (again) and Sudden Impact.

The Power of Video Marketing

So what do a few extremely recognizable quotes have to do with video marketing for businesses? It’s simple: people like to watch videos (over four billion hours of videos are watched monthly on YouTube) and they love to remember, discuss and re-watch their favourite videos. The goal of marketing is to create something memorable and valuable in hopes of spreading the word through interested people, so why not tap into a whole medium and community that’s doing exactly that?

The fact is, whether or not you embrace the magic of the movies, other companies are taking advantage of video marketing and, unfortunately, might be leaving you behind. Here are a few well known examples that exhibit both the simplicity and effectiveness of short marketing videos:

Blendtec - Will it Blend? (iPhone)

This video is effective for so many reasons. First, if you assumed that video marketing would be extremely expensive, consider that this video could’ve been shot using a simple camera in somebody’s kitchen. It doesn’t need to be extravagant to be successful. Second, showing off the blender’s blending prowess by powderizing an iPhone is brilliant. It’s something outside the box that got people talking and sharing the video and, most importantly, it showed how well the product works. The video highlights the value of the product in an interesting or funny manner, which is the essence of successful video marketing.

You probably remember the Old Spice TV and Internet ads featuring the aptly named Old Spice Guy. The ad campaign was interesting for a number of reasons, this particular video because it’s funny, weird, and aimed at women (though the product is for males):

These video ads themselves were great, but made for TV. The social video campaigns that followed these TV spots (which also went viral on the Internet) were equally as effective. Old Spice had the Old Spice Guy respond to tweets with personal YouTube video clips, which directly engaged customers and captured the attention of millions of fans around the world. Here’s an example of one of the responses where the Old Spice Guy proposes on behalf of a Twitter user:

Trust the Stats and the History

History suggests that people love movies. The stats on YouTube videos are staggering. The effectiveness of well known video marketing campaigns are obvious. So, rather than get bogged down and scared of where to start with video marketing, you should first make the decision to dive headlong into the challenge and embrace the medium. There are certainly enough reasons to give video marketing a try, and you can always start small. There’s a whole chapter on video marketing in our recently released digital marketing book!

Tips to Lead your Remote Sales Team with Videos

Want to learn how to use video for managing sales teams? We can help. Here is a guide to using video to manage your remote sales team. 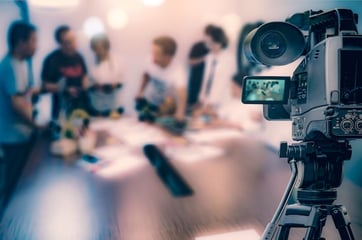 What is Video Marketing and How Can It Help Generate Revenue?

Discover the ROI of video marketing, from building trust and awareness with prospects to increasing revenue and profits.

Short, Sweet and Honest: A Recipe For Video Marketing Success

By getting to know your audience, keeping things short, and being transparent about your content, you, too, can use video marketing to reach your overloaded, short-on-time audience!

18 Tips to Humanize your Business with Video Marketing